Check the story out at http://www.cleveland.com/brook-park/index.ssf/2012/08/brook_park_man_plunges_into_ef.html.

And plan to join us at the Abram Creek cleanup on October 13th!

Funds have been awarded through the Ohio EPA's Water Resource Restoration Sponsor Program (WRRSP) for the restoration of Healey Creek in Brunswick's Venus Park.  The $390,800 project will improve aquatic habitat in Healey Creek by creating a new floodplain adjacent to the creek.  The project will also reduce downstream delivery of sediment from streambank erosion, and provide flood storage in the headwaters of Healey Creek.  This funding is made possible through the sponsorship of the…

The Plain Dealer has an update on the continuing investigation into the April 2012 fish kill on the East Branch of the Rocky River.

Join us at a River Cleanup!!!

River cleanup season is upon us!  Please consider joining us at one of these upcoming cleanups in the Rocky River Watershed.  For all cleanups, trash bags will be provided.  Volunteers should dress for the weather and wear work boots or old shoes.  Long Sleeves, long pants and work gloves are recommended.  Children under 18 must have adult supervision. Pre-registration is required for groups.  Please contact Rocky River Watershed Coordinator Jared Bartley for more information at 216-524-6580…

The kill, which stretched ~3 miles from between Bonnie Park in Strongsville and Wallace lake in Berea, killed tens of thousands of individual fish of a variety of species.

Coverage can be found at the following: 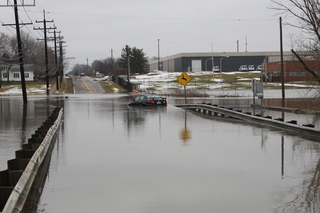 It doesn’t take a meteorologist to know that 2011 was a wet year.  Local precipitation records were not only broken, but were shattered by over 10 inches.  One storm in late July dropped 4 inches of rain over a 2-hour period in portions of the Rocky River Watershed.  And who could forget the flood of February 28-March 1, during which the gage on the Rocky River near Cedar…

Courtesy of Pat McGannon from the Bay Village Green Team.

Stopping Sediment at its Source in the Rocky River

Cuyahoga Soil & Water Conservation District (SWCD), in partnership with Medina County SWCD, Lorain SWCD and the Rocky River Watershed Council, has been awarded a $400,000 grant from the Great Lakes Commission to reduce sediment loading in the Rocky River Watershed.  The three-year project will  focus on three target subwatersheds with known sediment issues—Baldwin Creek, Mallet Creek and Plum Creek (the Plum Creek that flows into the West Branch in Olmsted Falls).  The Rocky River’s…

Headwater Streets is a financial incentive program for residents in the Abram Creek and Baldwin Creek subwatersheds of the Rocky River.  This roughly includes all of Middleburg Heights and portions of Berea, Brook Park, Cleveland, North Royalton, Parma and Strongsville (see map).  Funded by a grant from the National Fish and Wildlife Foundation's Sustain Our Great Lakes program, the goal of the project is to reduce storm water pollution in the target areas.

Click here to see the Cleveland.com article and to see the video of the fledging eaglet!

Why are there no frogs in Lake Abram?

Jeffrey Bhasin, a Quantitative Biology student at CWRU, has developed an online computer simulation that models the hydrology of Lake Abram.  Concrete surfaces block the natural sponge effect of soil in absorbing water. As a result, high levels of water runoff happen, and this runoff water drains into nearby reservoirs. Lake Abram is one such reservoir. Lake Abram is connected to a larger wetland area, and when the lake floods, the excess water floods into the wetland area too. The wetland…

The Cuyahoga Soil and Water Conservation District, partnering with the City of Berea, the Rocky River Watershed Council and the Northeast Ohio Regional Sewer District, expects to receive approximately $343,000 from the Ohio Water Resource Restoration Sponsorship Program in early 2011 to remove three low-head dams along the lower 0.5 miles of Baldwin Creek in Berea.  Cuyahoga SWCD has received an additional $147,000 Grant through the Ohio EPA Surface Water Improvement Fund (SWIF).  The funds…

The Ohio EPA will make available for public information a Limited Environmental Review of the Preservation of the Heron Rookery Wetland Rocky River East Branch Project.  This project consists of ecosystem protection focusing on preserving water quality in the East Branch of the Rocky River.  Upon its release, the document may be viewed at either:  Cleveland Metroparks' website at www.clemetparks.com, Ohio EPA's website at…