About the Rocky River Watershed 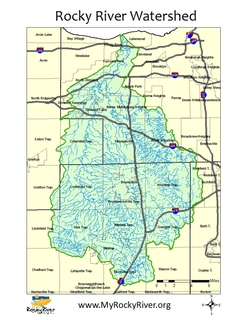 The Rocky River Watershed consists of the entire area that drains to the Rocky River when it rains.  This 294 square-mile network of neighborhoods, farms, forests, parks, roads and streams stretches from Medina to Lake Erie, and includes parts of Cuyahoga, Medina, Lorain and Summit Counties, including all or part of 32 municipalities and townships.

Nitrogen loading and habitat modification, including siltation, are the primary water quality stressors facing the Rocky River Watershed (RRWAP Appendix D).   The Rocky River TMDL establishes a watershed-wide nitrogen reduction goal of 935,000 lbs/yr – a total equal to 46% of the current estimated load.  Phosphorus is of secondary – but growing – concern.  During Ohio EPA’s 1992 water quality assessment, phosphorus loading was below recommended targets.  By 1997, it had increased to the point that a TMDL was warranted, with the 2001 TMDL creating a watershed-wide reduction goal of 24,740 lbs/yr.

Nutrient loading becomes more of a problem in the lower portion of the watershed, particularly the Mainstem, than in the upstream subwatersheds (with the highly elevated nutrient levels in Baldwin Creek being the exception).  On the other hand, habitat modification, including channel incision, bank erosion, siltation and an overall homogeneity of geomorphic features, persists primarily in the upstream HUC-14 and smaller subwatersheds (RRWAP pages D-2,3).  For all stream segments in the watershed that are listed by the state of Ohio as having partially for fully impaired for their Designated Aquatic Life Uses– the Mainstem, Abram Creek, Baldwin Creek, Plum Creek near Olmsted Falls, Plum Creek at Brunswick (there are two Plum Creeks in the watershed), the South Branch, the lower West Branch, and Baker and Blodgett Creeks – nitrogen and/or habitat modification are the causes of impairment.  Many of these segments also have a bacteria-related Recreational Use impairment (RRWAP pages D-11 to D-28).

Urban and suburban development is the most important factor impacting water quality and aquatic habitat in the Rocky River Watershed.  New developments, both large and small, have been commonplace for more than 50 years.   The lower portion of the watershed, including the Mainstem, Abram Creek and Baldwin Creek subwatersheds, is almost entirely urban and suburban.  In fact, impaired stream segments in the watershed are associated almost exclusively with developed areas (RRWAP page C-1).  While overall land use in the watershed is only 14% urban, this development is largely concentrated in its headwater systems.  For instance, Abram Creek is over 45% urban, Baldwin Creek is almost 27% urban, and Plum Creek at Brunswick is over 21% urban (RRWAP pages A-11,12).   Each of these subwatersheds drain less than 12 square miles, and each is considered impaired for its designated aquatic life uses.  Further demonstrating the plight of the Rocky River’s headwaters is Healey Creek, a tributary to the East Branch.  While just over 1000 acres of this 3023-acre watershed have been developed, almost exclusively in low-density residential, over 90% of this development is concentrated in the upper half of the watershed.  The lower, less-disturbed half of Healey Creek has good instream habitat, scoring a QHEI of 65 at the lone Ohio EPA sampling location in 1997, 0.9 miles upstream of its confluence with the East Branch.  The upstream half, however, is characterized by channel incision, eroding streambanks and heavily embedded substrates.  While not listed by Ohio EPA as impaired, the Rocky River WAP identifies habitat modification due to urban runoff as a high-magnitude stressor (RRWAP page D-17).  This is illustrative of the condition of the Rocky River’s headwaters in its many developed areas.